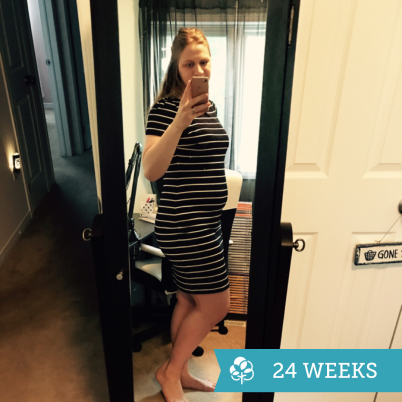 Here we go again with the dark clothing!! I promise lighter and brighter thoughts are on the way!!

Now that I have most of my basic maternity clothing items, I’m steering more in the direction of “dual-use” non-maternity pieces that I can get away with for the rest of my pregnancy, but then wear again after I’m pregnant. This particular dress was one that I picked up at Ann Taylor on the weekend, and one that I hope will look much more flattering once I’m not rocking a watermelon in front of me LOL

24 weeks WAS moving along relatively smoothly for Babe and I, until Sunday of the weekend when we hit a small but significant stumbling block!

I woke up on Sunday feeling major queasiness and just an uncomfortable tension in my stomach. A bit hard to describe, and I wasn’t sure if it was my actual stomach that was queasy, or if it was some sort of pregnancy-related tension / air build-up in my stomach that was throwing me off. In any case, I really didn’t feel great, but made myself go and take my friend Meaghan’s BodyPump class anyways as I had missed a workout on Saturday and was feeling like I needed to move.

The funny thing with the queasiness / tension was that it seemed to kind of come and go, I would go an hour without feeling anything, but then another hour feeling constantly queasy. I’ve been SO super lucky with this pregnancy to not really have had any nausea or upset stomach at all so far, so this was all very abnormal for Babe and I. Neither of us liked it very much. Glad we’ve worked out this whole “no morning sickness” deal Babe. Fist bump.

Sunday was Fathers Day, and we had plans to go out to Niagara Falls for the afternoon with my Dad and then out for dinner in Niagara later that evening. Matt was actually out of town this entire weekend on a canoe trip with his brother Neil, so I didn’t get to see him until late Sunday night when he got back.

I fought with the queasiness / tension in my belly all day long in Niagara; never really feeling 100% better. By the time we got to dinner, I was really feeling awful and just knew that me eating anything wouldn’t bode well for the car ride back home, so I just had a few bites of a garden salad (what a crying shame – we were at the BEST Brazilian Steakhouse!!) and even that didn’t sit well with my stomach. The car ride home was misery, and I spent most of it with my head inside a Ralph Lauren shopping bag feeling like I was going to throw up at any second. Thankfully, for those in the car anyways, I didn’t!

By the time I got home, Matt was home and unpacking from his canoe trip, and I had some Fathers Day gifts laid out for him, but I was feeling so terrible that I could hardly acknowledge the poor guy on my way to the couch to curl up in the fetal position. The tension in my belly had evolved to twisting pains, and I knew I was going to be sick at any moment. We called my midwives hotline and she suggested that I take a ginger Graval and try to get some sleep; which all sounded good in theory! I popped one Graval, but woke up about 20 minutes later puking my guts out. Lovely!

I threw up about 4 times and somehow made it upstairs to bed, but was up all night long (and I do mean all. night. long) with the same twisting stomach pains that I had had before the first puke-episode. I knew that I was doomed for Round 2. Around 5 in the morning, Matt got up for work to find me wide awake, writhing in pain with my pathetic little bucket.

Side note: I still can’t believe the guy gets up at 5am to go to work after going to bed at the same time that I do every night, that is some serious dedication right there.

He took one look at my pathetic little set-up and we assessed that maybe he better stay home for a few more hours to make sure that nothing crazy happened with Babe and I before he went in.

Sheesh – thank you god for instincts on that one.

I was puking my guts out again within 45 minutes, but this time, had a similar episode to my previous bout of food poisoning last year and actually passed out cold right in the middle of the whole episode. In a pool of my own vomit. Yikes.

Poor Matt was terrified (as he was the last time that this happened), but because it wasn’t the first time that it had happened, he also knew what to expect. After yelling my name for about 10 seconds, I apparently came to, with zero recollection of what had happened.

Alright, time for a funny side-story to lighten the mood around here! Last year when I passed out (twice in that episode last year actually), when all was said and done, Matt and I were re-hashing the whole mess and came up with the analogy that when I pass out, I look something like a gutted salmon at the grocery store ready to be wrapped up and handed off to a hungry family. Something to do with how wide my eyes get and how my body straightens out completely. LOL.

For the past year, whenever we (affectionately) look back at that passing out episode, we refer to it as “that time that I / Sara turned into a salmon”. LOL – call us crazy, but we think we’re hilarious.

Anyways – so there I was in full on “salmon-mode”, and Matt made the executive call that we were going to the hospital. No more messing around with hotlines or anecdotal internet advice. I was able to get up and into the car myself thankfully, and off we went.

8.5 hours later, 2 IV bags of fluids, 1 absolutely revolting Pedialyte drink and about 100 tests later and we were finally home, no worse for wear, and reassured that Babe was doing just fine in there like the tough little muffin he is. The one up-side to the whole ordeal being that we got an extra ultrasound and got to look at Babe again, who is still in there with his legs crossed exactly like he was back at our anatomy scan! Little monkey has found a comfy spot and he ain’t movin’! He also reaffirmed his hatred for ultrasounds / doppler machines by kicking the ultrasound technicians wand so hard that she actually jumped in her chair LOL – apparently he’s really not a fan of the frequency that the machines give off!

Anyways – all’s well that ends well, and thank goodness Babe and I are back to just about 100% today, I haven’t had any more stomach pain or nausea and have kept all food down for nearly 36 hours. Operation rehydrate has commenced.

If I rewind a bit back to before the disastrous Sunday – Monday fiasco, it was actually a very productive weekend, nesting ninja was in full effect, and I managed to get another two garbage bags of clothes off to donation, and move all of my clothes out of Babe’s closet and over into our guestroom closet, so we now have one completely empty closet ready to store Babe’s things! Woohoo – sweet, sweet victory!

I don’t want to start putting things away in the closet until I have some kind of organization system going, so for now things are accumulating on the futon in our office. Once Matt’s family is gone next week (his parents and brothers will be at our house this week / weekend for our baby shower!), we’ll be starting the process of emptying furniture out of the office and moving it downstairs to the basement so that when the crib / other nursery furniture arrives (should be within the next 2 – 3 weeks at most!!) we can get it all moved in and set up. Things are coming together!

My energy / mobility continues to be a bit slower (as I noticed for the first time last week), and I’m just finding that I have to accept that what I used to whip through in 30 seconds now might take me 2 minutes to do instead. Case in point: the days of carrying 23 bags of groceries into the house in one load are over. I need to make a few trips now!

I’m so looking forward to this weekend for our baby shower, we’re doing a co-ed shower and a much more relaxed vibe which I think should be more “BBQ and hang out by the pool” then “official” baby shower, and I’ve also booked a photographer to do a lifestyle photo-shoot session for Matt and my entire families just before the shower as well! I’m really looking forward to it – and am very grateful that my crazy salmon-episode took place LAST Sunday, and not this COMING Sunday (the day of the shower)! Yikes!

On the agenda for this week is to re-hydrate, re-energize with some good food and just take better care of sweet little babe, he’s had a rough couple of days!

Hope you’ve all had a very “un-salmony” week!