First of all – I wanted to say a HUGE, massive thank you for the all of the thoughtful condolences and well wishes that I received for my Grandpa last week – and also for the all of the good news that was shared with me!! Each and every piece of good news put a big smile on my face, so THANK YOU for that!!

This week has been a bit of a whirlwind, but much smoother emotionally then last week for sure. We drove back up to the Sault on Thursday morning and arrived in time for the celebration of life on Thursday night. Lots of people I know say that they don’t want a formal funeral, and my Grandpa was one of those people, but I just know that he would have loved what his kids put together for him! It was a really nice night, and a lot of fun! The whole thing started with a mix and mingle at the funeral home with desserts and drinks, nothing formal, just a chance to visit with family that we haven’t seen in a long time. Then the party moved back to my Grandma’s house, where we ended up passing around my Grandpa’s last bottle of brandy and telling funny stories about him (no brandy for Babe and I – don’t worry 😉 ). Everyone that told a story had to take a shot of brandy afterwards, and it ended up being a ton of fun. He would have just loved it!

**A quick side note of clarification from last week: I realized that when I initially wrote my 30 Week post that I was a bit unclear about my Grandpa’s name / Babe’s middle name!! Babe’s middle name will be Walter in honour of my Grandpa (and future Babes will also take their grandparents names as their middle name as well!). We won’t be announcing Babe’s first name until he arrives….sorry!! 😉

We drove back home on Friday, and Babe and I were quite happy to get out of the car after spending 36 hours on the Trans Canada in 6 days!! Thankfully, the long weekend was waiting for us when we got home, and we had a few days to relax and unwind!!

It honestly did take me a full day and a half to recover from the crazy car rides, I wasn’t feeling 100% on Saturday, but by Sunday was pretty well back to normal. My sleep has been pretty good, but I’m definitely dealing with more aches and pains over the course of the day, particularly in my upper back and my pelvis. Babe, babe, babe….. you’re getting heavy in there little fellow!!

He’s been such an active little monkey again this week, it still just cracks me up to see my belly moving around through my shirt. My midwife was right, and most of his movements have changed from short little jabs or kicks to more “rolling” type movements as poor little man runs out of room in there!! I’m having a hard time imagining that he will likely DOUBLE IN WEIGHT between now and when he is born…….EEKS!! How will he fit?! My back?! My pelvis?! LOL!!

I’ve seriously lost my nesting mojo (thank you LORD that I was so productive in the second trimester), in particular when it comes to cooking. Few things in life excite me LESS these days than standing in front of the meat section at the grocery store trying to figure out what the F we should have for dinner in a week. Matt’s been very helpful thank goodness, but I’ve been super unimpressed with myself the past few weeks. Come on Sara…GET IT TOGETHER.

I have a big giant list of things that I need / want to get done before Babe arrives, but like I said, my mojo has been fading fast!! I’m trying to give it a few more weeks before I dive into making freezer meals (because I don’t want them to go bad sitting in my freezer for months, and also because, let’s be honest, I’m a terrible cook, and I’ll be a hot mess trying to make freezer meals), and I’m also thinking of having a cleaning service in to do a deep clean of our house at some point. I’m still grappling with myself over the hair colouring thing, but I think I’ll just get over myself and do it a little closer to my due date so that at least I don’t have to worry about it once Babe is here….

At work, my replacement has officially started which is CRAZY, because it really does mean that the end is near!! We have a long 6 week period of crossover, but I’m super stoked to be handing projects over to him sooner than later (read: my earlier comments re: mojo).

I got a very cute basket of baby gifts delivered to my office from one of our suppliers this week, and guess what the feature animal was?! 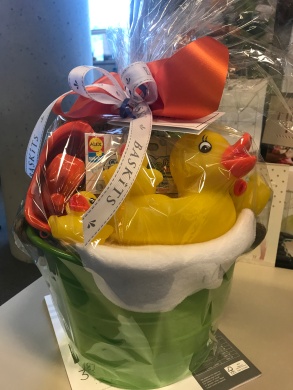 In general, time seems to have really slowed down this week, it feels like Week 31 dragged on and on….but here we are on the other side, and I’m ready for Week 32!! Matt is off to Winnipeg this week to visit our close friends and their super sweet little babe Alexandra (our Babe’s future buddy for life / wife), and I’ll be busy with errands, a movie date with my best friend and our hot guys driving fast cars (Fast and the Furious……kind of a tradition lol), and a wedding shower for my neighbour.

As per usual in life – I’m finding myself caught in the struggle of eagerly anticipating what’s to come and wishing for it to arrive, and trying desperately to live in the moment and enjoy the journey. Some days I’m the latter, and some days I’m the former!

Well, that’s enough out of me for this week, for now, Babe and I are off for our daily Drumstick!

F it, I’m not even sorry anymore.