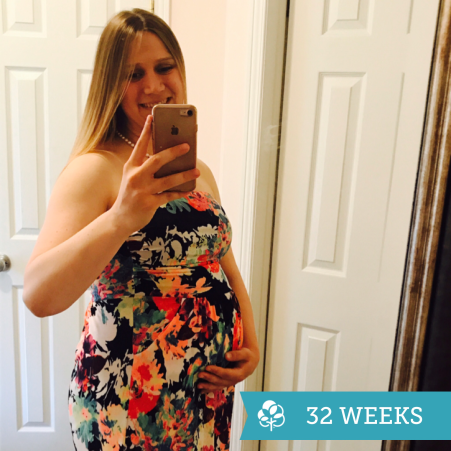 Colours! So many colours!

I thought it would be fun this week to do a little side-by-side comparison of the past several weeks, since it’s been such a huge growth spurt for Babe and I! Check it out!

We’re getting there! My BabyCentre app tells me that today (the very start of 33 weeks), Babe weighs about as much as a pineapple. An interesting visual, but we’ll take it!

I thought that I had made a break through with the whole maternity pant thing last week when I bought two new pairs of pants from the Gap with a “demi-panel” (the last style that I haven’t yet tried / failed at for maternity pants). I was very pumped when I first tried the pants on because standing up they were super comfy! Sadly, when it comes to sitting down all day (or even for 5 minutes for that matter), it turns out that they were sent straight from Hades, and will never be worn again.

This week I’ve officially thrown in the towel and am just wearing my Lululemon leggings to work, even though it’s wildly inappropriate. Screw it, I’ll figure out the whole maternity clothes thing for my next pregnancy. Maybe.

This week has been a pretty quiet one on the home front, Matt took a trip out to Winnipeg to visit with our friends Jeff, Sydney and their super sweet little babe Alexandra, who was born several weeks early back in June. She’s been doing so well, and it was so nice that Matt had a chance to get out to see her and Jeff and Sydney before our Babe arrives! I was a teeny tiny bit nervous while he was gone that something crazy would happen and I would go into labour while he was a plane ride away, but thankfully the most eventful happening of the weekend was a movie date with my best friend Lindsay to watch the (fairly mediocre) Fate of the Furious movie and eat my (rather impressive) weight in snacks.

I had a wedding shower to go to on the Sunday, and got myself into a bit of a mood over nothing because I was feeling so frustrated with having to be so concerned about what I’m eating all the time. If you’ve followed along with my pregnancy since the beginning, you know all about my paranoia with food safety, and although I’m happy to say that it’s gotten much better as I’ve progressed further, I’m still avoiding a ton of foods that make eating out (or anywhere where I’m not controlling the food for that matter) pretty challenging.

The wedding shower was a Spanish Tapas theme (so cool!), and a total “foodie dream” complete with a live chef preparing the appetizers right in front of us, but I found that I wasn’t able to eat 95% of the food because I couldn’t get out of my head about the cheeses, the spices, the meats……on and on.

My family went out for dinner after the shower, and lo and behold, there wasn’t ONE SINGLE THING on the menu at the fancy-ish, foodie restaurant that we went to that I really felt comfortable eating (seriously – foodie spots, NOT FOR ME, at least not during this pregnancy)….please for the love of god just give me a simple pasta or a thoroughly-cooked protein, carb and vegetable (without soft cheese and other craziness all over it) ……….. please!!

My pelvic pain definitely bumped up a few notches this week on the pain scale, to the point where I thought I would mention it to my midwife at our appointment on Monday. I’m rocking a pretty sweet “waddle” these days, and if you’d like to try and imitate what I look like (you know….for some reason…. LOL), then perform this simple exercise:

Annnd there you have it. The Sara WaddleTM

My back has been acting up a little bit over the past few weeks as well, more towards the second half of the day, as I spend most of my day sitting at a desk. This is definitely more manageable, and I think if I did a better job of getting up and stretching throughout the day, I could probably help to mitigate some of this for sure.

I’m forcing myself into a bit of a holding pattern on a couple of remaining tasks like packing our hospital bags, doing freezer meals and stock-piling household items (shampoo, toilet paper, paper towels etc etc) just so that I feel like I have some productive things left on my list to do to fill up those last few weeks when I know that time will slow down even more than it already has (seriously…..crraaaaaazzzzyyyyyyyyyy slow moving weeks lately). I’ve got my eye on 35 weeks to get our hospital bags ready, and start freezer meals. Maybe shortly after that to start stock-piling.

I think we have just about everything that Babe needs now (I had a bit of an OCD flip-out over the weekend and took every single sleeper, onesie and article of clothing out of his dresser, re-folded half of it using a different folding method, and hung up the other half of it in the closet….don’t ask…..), but I still need to pick up a few things for myself like nursing tanks / bras and some “in-between” clothes that will be comfortable to transition back to my regular clothes (SOMEBODY SAY HALLELUJAH).

This weekend is completely spoken for as I’m off to the Can Fit Pro conference in Toronto for my 10th consecutive year! This year will look a lot different than it normally does for me, because I’m just not able to do 9 hours of intense exercise in one day this year, but I’ll darn sure be doing my best to keep up with my super-fit friends and the rest of my tribe! I’m hoping that Babe won’t mind the busy weekend!

Well, I think that’s about all from Babe and I this week, and so I’ll finish off this week’s post on a bit of a more somber / serious note. What’s going on south of our border recently has really shocked and horrified me (as it has all of us really). I’m fearful every day that this escalates about the kind of world that me and the rest of us are bringing our sweet little babes into. What kind of world will we leave for them to inherit? Will I seriously have to be concerned about my Babe falling in line with the wrong crowd some day and carrying a torch down the street at night screaming that white people will never be replaced? Or on the other hand, feeling so helpless and horrified by the situation, that he goes to a rally to protest the behaviour, and ends up being rammed with someone’s car?

I guess I’ve always kind of lived by the motto that we need to be the change we wish to see in the world, but these days, it hardly feels like that is enough.

Anyways – just where my head and heart is at this week. Sending much love to all of you – and to your extended circles as well. I count myself so lucky to be surrounded by such a wonderful network of truly good people, and to live where we do.