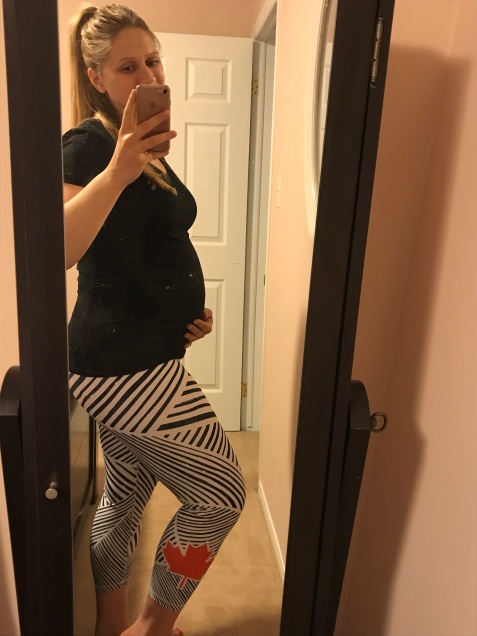 I just love these crops, so much in fact that I’ve decided I won’t be wearing them for the rest of this pregnancy, I don’t want to stretch them out and wreck them! I ordered these from my friend Renate’s Silver Icing online boutique, and I just love all of the clothes that I’ve ordered so far (believe it or not, these crops are the only workout clothes that I’ve ordered – the rest of the pieces are all “real life” clothes)! If you’re in the market for some cool new clothes, check out her website here!

(On a side note – it is seriously time for me to clean this mirror….it’s so dirty!!)

So….although I’m really thrilled to be on the other side of my 30th week, I have to admit that I’ve had a really, really hard week.

Things really turned south the morning after I posted my 29 week update last Wednesday, when I woke up to a text from my Dad that my Grandfather in Sault Ste. Marie had taken a bad fall in his retirement home, had suffered a fractured skull and had bleeding on his brain. Given the fragile condition of his heart, the decision was made by the doctor team that he could not survive the brain surgery that he needed, and was therefore transferred to palliative care.

With so much uncertainty about how much time we had before he would pass, we decided to go up to Sault Ste. Marie right away on Friday morning. We made it there by Friday evening, and had a chance to say our goodbyes. I was also able to share with him that we plan to give Babe his middle name (Walter). He passed away about 7 hours after we got there.

Things were very uncertain, and very unclear for the rest of the weekend. We had no idea for a few days what would be happening in terms of a funeral / celebration of life, but finally learned on Sunday afternoon that there would be a celebration of life on Thursday evening. This made things difficult for us because both Matt and I would be missing an entire week of work (on top of the Friday that we had already missed). We made the decision to come home on Sunday, work Monday – Wednesday, and then drive back up this Thursday (tomorrow).

Unfortunately, best-laid plans didn’t really hold true on the way home, and a huge accident on the Highway 69 closed the road for 5 hours. It took us nearly 12 hours to drive home from Sault Ste. Marie (normally a 7 – 8 hour drive) and we ended up having to double back all the way to Sudbury to take an alternate route.

I was so extremely anxious and worried about being in the car for so long with Babe, and being so far off the beaten road and far away from a hospital as well. The whole thing was really not a good scene. The rest of this week has been exhausting in it’s own way. I’ve felt a complete and total, absolute lack of support from my family this week that’s really upset me and put a lot of stress on Babe and I.

In lighter news, OMG you guys, Babe has never been more active then he has been the past week! It’s seriously hilarious! He’s squirming around in there all day long, there is a very rare minute where I can’t feel him! His movements are so strong now that I can see them through my clothes! It just cracks me up (Matt too!). When we were up in the Sault, he was moving around so vigorously that we could see him through the quilt on the hotel room bed! LOL

I had an ultrasound at the end of this week, and Babe clocks in at 3 pounds 9 ounces (above the 3 pound 3 ounce average for 31 weeks)! I can’t believe I have an almost 4 pound baby rolling around inside of me! The big news from the ultrasound was that he isn’t transverse anymore…..little guy is head down, and ready to go!! WOOHOO!! Thanks Babe, you heard my desperate plea from last week!! Maybe all of that vigorous moving was actually him making the flip….

My pelvic pain has been about the same as last week, but thankfully it hasn’t gotten any worse! Now that Babe is head down, I’m super hopeful that this will let up a bit. Time will tell…. maybe I have a few burpee tuck jumps left in me for this pregnancy after all??? (I kid, I kid….;)).

My energy levels have been low this week for sure, but I’m chalking that up mostly to stress, and struggling to eat decently while traveling. I’ve still been sleeping decently despite it all – so THANK YA JESUS for that.

To finish on a happy note, I had a great dinner / catch-up with some work friends yesterday night, and so many exciting things are happening for my friends these days (both work and not!). One of my friends announced that she was pregnant, one is  off to do her MBA, one is coming back to work after her maternity leave, and one of my oldest and dearest friends from outside of work just got engaged! It is the season of celebrations and good news….

I’m trying really hard to focus on all of this good and to let go of the bad, but I’m not perfect, and more often then I’d like this week I’ve found myself slipping down a dark road into the negative. I’m really hoping to turn around these thought patterns for next week – so if you’ve got some good news to share, PLEASE, I’d love to hear it!! Tell me what is going wonderfully in your life so that I can celebrate with you!!