I’m happy to report that Babe is a natural in the great outdoors! He did great with the camping trip this past weekend, and really gave me very little trouble overall for the 2.5 days that we were out there!

The most challenging part of camping while 29.5 weeks pregnant was the whole washroom situation. Our original campsite that we were assigned to was nowhere close to a washroom, which was a bit of a problem considering I have to go about 33,000 times per hour now, including in the middle of the night (my god I miss my old camel bladder…on the day of our wedding, I didn’t go to the bathroom for over 16 hours, and still didn’t really have to go when I finally took off my dress at 3am!?).

Thankfully, Matt was great and sprung into action before Neil and Kaitlyn even arrived at the site, checking out other lots that may be better situated for Babe and I, and we managed to snag a different campsite that was a short walk from the “real” washrooms (you know, running water etc). Thank goodness.

We were camping in Balsam Lake Provincial Park, which is located right on the huge lake, and we spent most of the day on Saturday out in Matt’s canoe, much to his delight! Few things make my Matthew happier then the great outdoors and being in his canoe, so it warmed my little heart to be out there with him. We ended up paddling somewhere between 6km – 8km all the way across the lake, around a point and down to another Provincial Park (Indian Point) where we had a little picnic for lunch.

I know what you’re thinking.

What in the name of all that is holy would Sara be willing to eat out of a picnic basket while camping in the woods without Lysol wipes and a stove to burn the life out of all the food?

And the answer my friends…..

Matt and his brother grew up taking long interior camping trips with their dad and brothers, and they seriously know what’s up when it comes to surviving in the wild! Neil brought his single burner stove and a little tiny pan out in the canoe, and made us probably the best grilled cheese sandwiches I’ve ever had in my LIFE out on that island. 8km paddle / fresh air aside; I would put this sandwich up against any I’ve had before, seriously! I (of course), ate two. One for me, one for Babe. Duh.

On the way back across the lake after our picnic, things got interesting! Matt had brought his fishing rod and some new lures with the hope of dropping a line in and maybe catching a Muskie (read: Muskellunge: a species of large, relatively uncommon freshwater fish native to North America). It was after 2pm by the time we set back across the lake, definitely not the ideal time for fishing, but figured, what the heck, why not toss the line in on the way back across. Neil’s girlfriend Kaitlyn took the first turn with the rod as we started the long paddle back.

Within about 5 minutes of paddling, Kaitlyn called out that she thought the line was snagged. She gave it a couple of good tugs, and thought for a minute that a fish might be on…..but then decided, no, it was just snagged. She was struggling to get the snag free, so we circled back and she handed the rod over to Neil to try and get the line loose again.

Neil took the rod, gave it a couple good tugs, fixed some settings on the rod…..and then the rod nearly got yanked out of his hand as the “snag” started to pull back!!

I think at this point I literally started just screaming my head off (seriously, zero chill over here) while Matt frantically rooted around in our canoe for the net and Neil handed the rod back to Kaitlyn to reel in her haul.

As she started to reel and the fish got closer to the surface, Matt flipped out and yelled “OH MY GOD, I THINK IT’S A MUSKIE?!” (more screaming from me). We caught our first glimpse of the fish in the water close to the canoes, and it was a beast! It looked like an alligator coming to the surface!

When all was said and done, they grabbed the fish in the net, assessed that it wasn’t a Muskie, but rather a very grumpy looking Northern Pike (much more used to being the predator as opposed to the prey!), took a few trophy pictures, and tossed the grouchy thing back to go and prey on some more innocent fish (lol). Our “finger” measurements told us that it was somewhere between 26 – 28 inches long!! Way to go Kaitlyn!! 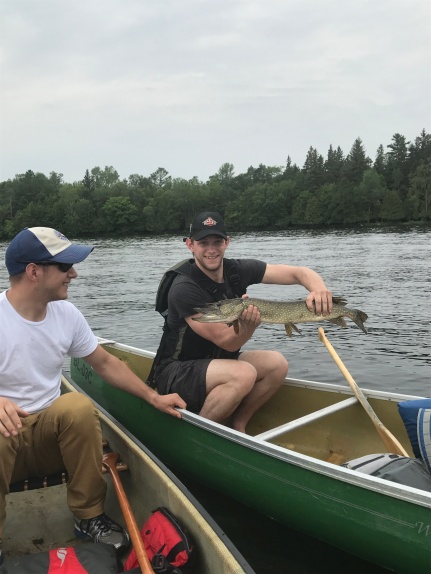 All in all, it was a really good weekend, and I so appreciated all three of my camping buddies taking care to make sure that there was food that I was comfortable eating, and probably taking it a tiny bit easier then we may have otherwise (you know – 16km paddle aside). Oh, and to Matt for giving Babe and I the entire double air mattress to sleep on while he slept on his little cot on the side lol

Aside from camping, it’s been an okay week. I took Monday off work and got an extra BodyPump class in which was great, but I’ve been dealing with a bit more lingering pelvic pain these days (not just after workouts, but all the time). I’m starting to get a tiny bit worried that I may have the start of SPD (Symphis Pubis Dysfunction), which basically means that the bones in my pelvis are getting slightly misaligned (very common in pregnancy). The pain is definitely manageable, I’d give it maybe a 3 – 4 out of 10 at the most, but it’s there, and it’s there most of the time now, which is a little worrisome.

My next midwife appointment is on Monday of next week, so I plan to mention it to her and see if there is anything I can do to help with this in the meantime. I really can’t complain, I’ve been so fortunate so far, and have really had to suffer through so little in this pregnancy, so if I’m in a bit of discomfort from here on out, then I can live with that. Would be jolly grand if I didn’t have to though! 🙂

I’m still eating like Michael Phelps (caved and bought another box of Drumsticks this weekend….I hate myself!!), and still gaining weight like it’s going out of style…..sheesh!! Make it stop!!

Sleep has been pretty good, although pelvic pain is sometimes waking me up in the night if I turn a certain way. I’m quick to get back to sleep though, so no biggie.

I’m starting to think about freezer meals for post-Babe arrival, and will probably get started on some of those in August….August is shaping up to be a very busy month for us though, with Matt headed out to Winnipeg for a weekend, wedding showers, CAN FIT PRO (eeeeeee!!) and possibly one more trip for me up to Sault Ste. Marie as well, so I’m sure that it will just fly by.

Hope all is well with you – have a wonderful week!