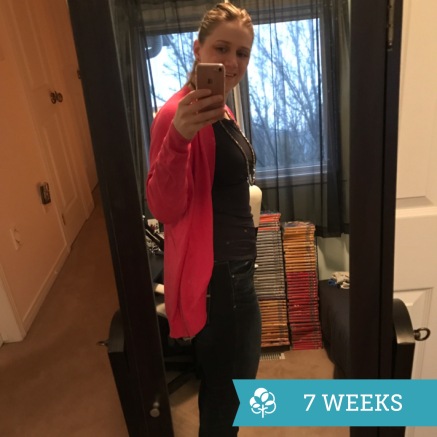 We got back from Vegas last Tuesday, and pretty much right away I came down with my second nasty cold of my pregnancy. I got sick almost immediately after finding out we were pregnant, and it’s totally sucked because it’s hard to be excited about everything when I’m feeling so totally awful!

This cold-turned-sinus-infection was much worse than the first go-round. I can’t remember ever being so sick in my life, I was literally incapacitated for at least 5 days. Matt was a god-send, taking care of me, bringing me soup from all over hell and half acre, even going on a drug strike himself and refusing to take any drugs for his own cold as a sign of solidarity (LOL).

I managed to pull it together enough to go with Matt to the Leafs game last Saturday that he had given me tickets to for my birthday. I had had an awful day, and had barely moved from the couch all day, but I knew that he had spent so much money on the tickets, and he was so cautiously hopeful that we would still go that I knew I just had to pull it together.

I felt a bit better at the game, it was nice to be out and to be distracted from how awful I felt for a while. I had a bit of a scary sinus episode in the car when I was trying to clear the pressure in my ears and the whole world started spinning. I kind of went downhill fast after that and felt truly awful until I went to sleep.

Tuesday was the scariest day of my pregnancy to date. I started to fill a little bit better, went to work, and made the decision that I was going to teach my CXWORX and BodyAttack class that night on my own. In hindsight, it was such a stupid decision. Even if I wasn’t pregnant, I still wasn’t feeling well at all, and definitely wasn’t up for the full-on effort of a double like that.

Throughout the entire class, I just felt like something was off. The class wasn’t agreeing with my body, I could just feel it as soon as we started to jump and run. I made it through the class and then went to the washroom right away to check for bleeding. Sure enough, there were a few tiny drops of blood.

I was petrified. I  thought for sure that I had done damage to my little babe, and to be honest, until I hear the heartbeat, I won’t be convinced that I didn’t that day. I drove home in a daze, my heart pounding in my chest.I made a deal with the higher powers in that car ride that if they would just give me a free pass on this one that I would never blow it like this again, I wouldn’t push myself, I would take better care of myself, I wouldn’t let them down.

I called Tele-Health as soon as I got home, and after asking me 100 questions, the nurse on the phone assured me that it didn’t sound like I had done damage, to take it easy and not stress out. After a very stressful night, I woke up to no more bleeding, and there hasn’t been any since those tiny drops that night.

Because of this, combined with advice from my doctor and my totally faltering immune system, I’ve made the decision to take a few weeks off from teaching until I get past the first trimester and get some reassurance that babe is growing well and is totally healthy and secure. It will also help when I can tell people at the gym so that I can explain that I need to take it a little easier than normal.

This is so hard for me; I’m feeling so low in terms of self-esteem on all fronts. I feel like I’m dropping balls in all areas of my life right now, including being pregnant, which is the hardest one of all. I really thought that I would be “good” at being pregnant, that it would be natural for me, that I wouldn’t miss a beat and would just sail through the first trimester. But it’s hard. It’s really been so hard so far.

All that being said – I wouldn’t give any of this up, I am so grateful to be pregnant, so grateful that Matt and I were able to get here naturally and on our own, and cautiously so hopeful and optimistic that our sweet little babe is growing as they should be.

We meet with our midwife for the first time on Tuesday – and I just can’t wait to find out when I can get my first ultrasound to hear babe’s heartbeat!! If all goes well, that will be such a moment of intense relief and happiness for me / us.

Fingers crossed for us….!!