When you imagine something in your head for so, so long, it almost feels like it turns into a bit of a work of fiction, doesn’t it? I always knew that Les Mills, Auckland City was a real place, but for some reason I felt like a child seeing Santa Claus in person when I looked down that street. The most enormous rush of adrenaline tore through me and I all but started literally running down Victoria Street towards the big, colourful building (my mom gamely in tow).

I remember getting to that infamous crosswalk (directly across from the gym) and stopping for a second to take it all in. I remember feeling this connection with the ground under my feet, New Zealand ground, and the gravity of the trip that we had taken to get here kind of all hit me at once. It had cost a small fortune, it was taking a big investment of time, but we were all in, and we were here. Here. I didn’t cry, but I think that the only reason for that was that I was feeling so much that it was a bit of emotion overload.

Oh, and the 30 hours of transit probably factored in as well 😉

I had my mom take literally one hundred pictures of me at that crosswalk, before we finally crossed over and made our way up the stairs and into the building. 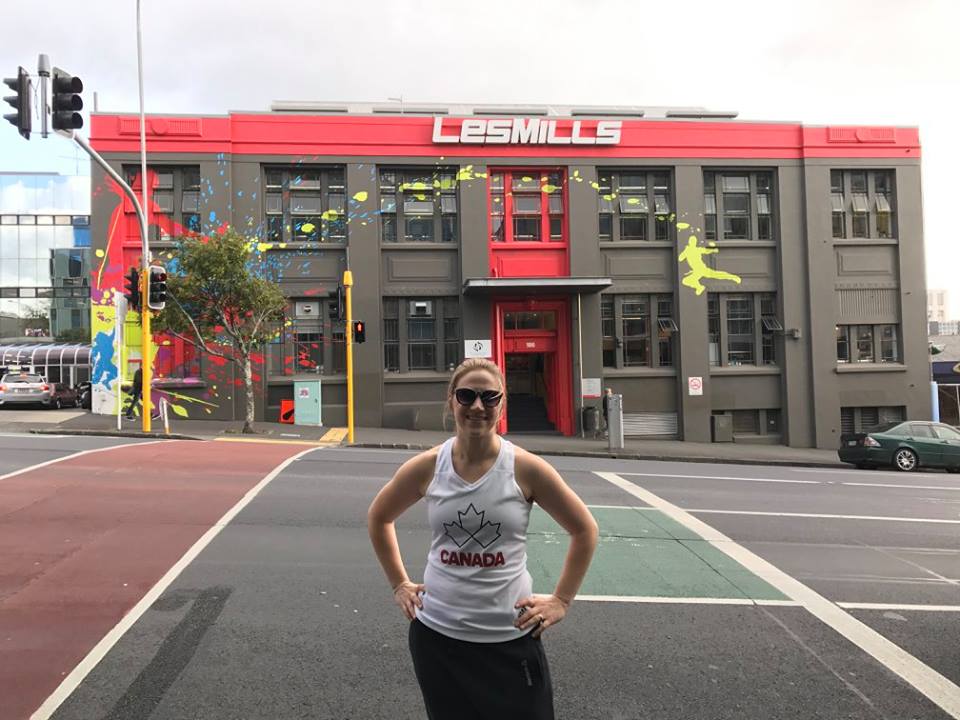 We had entered Les Mills Mecca.

I knew right away that we weren’t in Kansas anymore because I recognized half of the people in the lobby right away. The Les Mills Auckland gym has a small cafe off to the right hand side when you first enter with some seating, a big area with couches to the left, and then to the far left is a clothing shop named Platinum Sports which sells all of the Reebok Les Mills gear (oh HI there!). People were milling around everywhere, at the cafe, on the couches, chatting at the door….and I found myself gawking away at all of them.

This dialogue all took place in my head mind you, behind a very cool and casual exterior 😉

I blew my cool, casual exterior IMMEDIATELY when I walked up to the front desk and literally  blurted out at the girl with a thin blonde ponytail:”WE’RE HERE FROM CANADA, WE’RE GOING TO FILMING!!”. Oh my god…..

She took it all in stride, welcomed us to New Zealand, took our pictures for our membership cards, and gave us directions to the change room and up to Studio One. Sweet lord contain me.

We held onto our bags for now as we walked through the gym floor, up a set of stairs and across a small overpass walkway to the second part of the building, where the studios were. We had to take a couple of twists and turns before we finally came to this sign.

Up, up, up a couple of flights of stairs (my jet-lagged lungs wheezed in protest), until I could finally hear the sweetest, most familiar sound. That would be the voice of the one and only Susan Renata.

As we made our way up the very last flight of stairs and up into Studio One, Susan was just finishing up the ab track from her regular Friday morning BodyPump class. She was doing a really old track (which I realized later, was her practicing for the big “legends” tour that she was doing with the original five master trainers for BodyPump the following week in Amsterdam!) and there must have been between 60 and 70 people in the room, easily.

I wondered if the Auckland City members really knew or had a sense for how much their instructor means to the rest of the Les Mills world, and how immeasurably lucky they are to take her class every week. I certainly hope so!

I teared up a little bit for the first time yet standing there at the back of Studio One, looking around the room from top to bottom, taking in every blade on the ceiling fans, every fleck in the carpet colour, the fountains at the back of the room. I just couldn’t believe I was here. I’ll say this about 70 more times throughout the rest of this series, but when I close my eyes today, I can still see the scene like it was not ten minutes ago, in perfect high definition. I hope that the images never, ever fade in my memory.

Susan wrapped up her class, gave her class the challenge to help us newcomers put away the equipment properly (“show them how we do it here, will you?”) and then it was time for the SH’BAM rehearsal class with Rach (program director) and Lissa from the USA.

My poor mom was feeling pretty bedraggled by this point, and desperately needed something to eat, so she said that she would go down to the cafe and get something to eat there, if I wanted to do some of the SH’BAM rehearsal. I initially planned to jump in, but fatigue and jet-exhaustion was starting to set in a bit, and I realized how hungry I was too; and still had the intention to do the BodyAttack rehearsal class later that same afternoon. I decided to watch for a few minutes at the back of the room and then go down to join my mom for some food.

Rachel is just absolutely magnetic as a human being, and I couldn’t take my eyes off her on stage. She made me laugh right away cracking jokes about how Tao (the third presenter for SH’BAM 27) wasn’t there for rehearsal today because he was “you know, just off being a boy”. LOL.

The girls were rocking it, but I was feeling pretty guilty about my mom eating downstairs on her own, so after a few minutes headed back down the stairs, reminding myself that we hadn’t yet been on the ground in Auckland for 4 hours, and that I would be back in Studio One very shortly!

At the cafe, my mom was quite happily munching away on some chicken, and I got the most delicious quinoa potato salad that I think I’ve ever had. Tangy and delicious! We went over to the clothing store next, where I proceeded to spend over $1,000 on clothing for myself and every instructor that had asked me for things back home LOL….dear God….

We also met Mary in Platinum Sports, the single most adorable, blonde haired woman I’ve ever met in my life. Mary is the human being equivalent of pop-rocks candy. Effervescent and sweet and tangy and exuberant. She just loved to chat, and we spent nearly an hour in that store with her pointing out all the newest clothing, giving us tips on where the Program Directors liked to eat / hang out in Auckland, the inside scoop on filming…you name it! I think I would still be in there chatting if we hadn’t pried ourselves away LOL!

With our clothing purchases in hand, we took a walk through the Auckland streets over to the closest grocery store called New World where we wandered around picking up some snacks and food to keep in our hotel room. The grocery store was beautiful, and had an enormous wine section that made me laugh! I will never get used to seeing wine / alcohol sold in grocery stores!

With our heavy grocery bags in tow, we grabbed a cab back to the hotel where we gratefully sat down and had a bit of a rest on our balcony over-looking the Pacific Ocean. Paradise indeed. I took another little cat nap, got up and had a quick snack in the room before it was time to head back up to the gym for our first official class in New Zealand: the BodyAttack 96 rehearsal class!!!!

It’s only fitting that my first class in Studio One was Attack, and that it was with Lisa and her presenting team. I knew we had made the right decision to sit out SH’BAM (even though it hurt to!), because we were ready to go for Attack!

I agonized over what shirt to wear. “I have to save my GOOD Reebok for filming classes….but I don’t want Lisa to see me looking like a slob either….OH and I want to be branded Canada because…well then maybe she’ll notice that I’m an international!?”.

I finally decided on a CANADA shirt that I had picked up at the last minute from SportChek (not even Reebok….WTF), and we were off for our second walk back up that gigantic Nelson Street hill towards Victoria Street and the gym. We noticed more on our second walk, started to pick up landmarks, the streets starting to look a bit more familiar. We would get to know that walk so well over the next 10 days!

We strolled into Les Mills like we owned the place, scanned our cards, and were on our way right up to Studio One.

Moment to pause and re-read THAT sentence please……um, what????

It was Friday evening now, and I wondered if the class would be jammed because it was a filming rehearsal class! I was pleasantly surprised that there were only about 15 people in the room waiting for class to start (we were about 15 minutes early), and that there was lots of space! I started to recognize people right away in Studio One. There was this hip hop music playing over the speakers, and up fiddling with the stereo was none other than Nathan Jones (BodyAttack DVD presenter on several of our past releases), this rounds program coach. Nathan was tossing around a rugby ball in one hand, and fiddling with the microphones and the stereo in the other.

Directly in front of the stage was another very family face, an older member from the Auckland City club named “Johnny”, famous for his loud and exuberant “Woohoo” on the Attack DVDs from years gone by! He was set up maybe one foot in front of the stage and was DANCING to this hip hop music that was playing over the stereo! My mom was totally baffled and confused by this whole situation, but I took it pretty much in stride! Too funny…

In the first picture below, you can see Nate on the stage in all black, and Johnny in front with the red shirt! 🙂 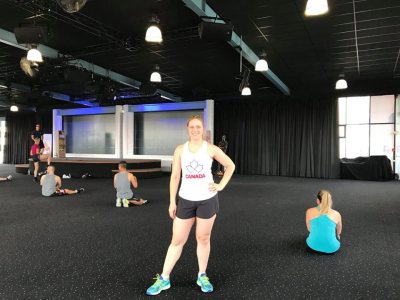 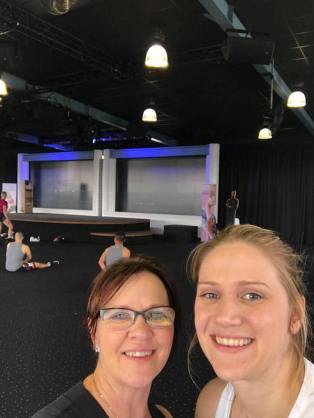 I nearly died when Lisa and the team finally walked into the room. It was cool to see them roll up to class just like any of us instructors roll in to teach our classes, dressed in their own workout clothes that they’ve worn a hundred times before, and whatever makeup has managed to survive on their face from the day; as opposed to the brand new sparkly, matching Reebok and 2 inches of stage makeup that we’re used to seeing them in on the DVDs and at international events. They were all so real and accessible, it was truly wonderful!

Lisa and Nate joked around over the mic for a few minutes (surprise, surprise, the Studio One microphone had been acting up recently!! Go figure!!) and before we knew it, it was time to get going. I had been feeling tired, but this enormous rush of adrenaline poured over me as soon as the music came on. We were ready to rock!!