Day 2 of the 30 Day Writing Challenge, and yet again, I’m in just under the wire! Today has been a bit of a frustrating day eating wise, in that I’m frustrated with myself I mean. I’ve been frustrated with my weight ever since the wedding, and today hasn’t been a step in the right direction at all. Unless the direction happens to be the land of chocolate cupcakes. In which case, I took a good couple of steps in that direction today.

SO, today’s prompt is an interesting one.

“Write about something that someone told you about yourself that you’ve never forgotten“.

There’s a couple of directions that I could go with this one. Positive, negative, somewhere in the middle. Being an instructor and being in the public eye quite a bit, we quite often get people sharing their opinions of us with us (and that’s a wonderful thing, feedback is a good thing!), and so much more often than not, we get people saying the most wonderful things to us about how we’ve positively impacted their lives in someway or another. And that makes everything that we do worth every single minute that we put into it.

I’m going to choose an interaction from the gym that was a bit superficial, but that really did mean a lot to me, and that I don’t think I will ever forget until I die. It was about 3 months before my wedding, and I had been busting my butt in the gym and in the kitchen all year working towards losing weight for the big day. I wasn’t seeing the progress that I wanted and was so frustrated with myself and my body.

I’ve written so many times on this blog about the struggles I’ve had since I was 7 years old with my weight. I half-joke all the time that I think I’m part Golden Retriever, because I just live to eat. And I never, ever want or need to stop. I really, honestly think that if I could, I would eat until I died. I just love food. Reigning that in to something that makes sense and that keeps my body healthy has always been a real struggle for me and still is to this day. To be honest with you, there isn’t a day that goes by that I don’t look in the mirror and think that I hate my body. But I’m working to change that mindset. Really, I am.

ANYWAYS. I give you the sob story background simply to frame this interaction and what it meant to me. It was a Wednesday night, after my BodyPump class. I am so blessed with my group of participants on Wednesday night. They are such a motivated, dedicated, hard-working group of people, and I just love each and every one of them to bits. We work so hard in that class, and the motivation isn’t flowing from the stage out to the floor, it comes 360 degrees from every person in the room. It is truly an awesome 60 minutes, and I’m always so proud of what we manage to accomplish together in that room.

On my way out of the gym, I ran into two ladies who were standing on the landing in the gym at the bottom of the stairs. I said good night to them, and they thanked me for the class as I approached them on my own way out. One lady went one step further.

“I just love your classes, I can’t believe the weights that you lift, they’re literally double what I lift for the back track.”

I laughed and told her that I had been doing the class for a long time, nearly 10 years, and to stick with it, she would get there herself if she wanted to. She then said,

“I just can’t get over it. I mean, I come to your class just to stare at your  body!”

Her comment touched a nerve with me that had never, ever been touched before. I’ve spent so much negative energy hating on my body, wishing that it looked different, looked better, performed better….and here was a lady, someone else, someone not related to me or affiliated with me in any way, telling me that she was envious of my body.

Who in their right mind would want MY body? Seriously…..WHO?

The comment rolled around in my head for a long, long time. Eventually, her comment was the start of a real change in my mindset leading up to the wedding. I started to look at myself through the lens of someone else, rather than through my own jaded lens. And I started to see different things that I had never, ever seen or noticed before. Strong, toned shoulders, well-defined calves and quads, curvy hips yes but a narrow waist.

I know what you’re thinking, “how vain”, “how superficial”….and it is, I won’t deny it. I guess the comment stayed with me just because it felt like real, honest, positive feedback about something that I’ve been so down on for my entire life. I keep that comment in my back pocket and hang onto it for days when I need a boost and am feeling down about things. Like today for example.

Tomorrow is a new day, so as T-Swift would say…. time to…. 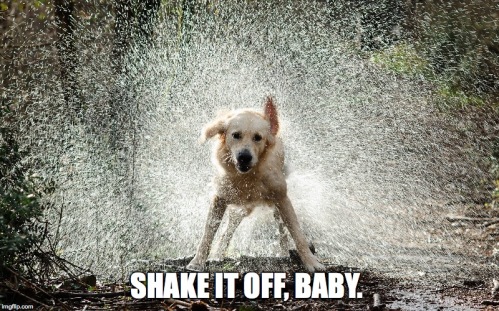 Before you take off for the night…won’t you share with me a comment that someone’s made about you that has stayed with you? 🙂