Hello out there (if anybody is still there?!) – I’m back.

Sorry for the long hiatus, to say it’s been a busy couple of weeks is about the understatement of the millennium. There have been a couple big events over the past few weeks that have kept me away from the computer screen. In no particular order….

1. It was Release Week at the gym

2. We moved into our new house

3. I injured my knee

If you recall from my Les Mills International mini-series, Release Week is the time when we get to officially “launch” the new music and moves for all of the Les Mills programs at the clubs. We get a new set of music/choreography each quarter, teach it for 2-3 weeks and then mix and match the music/choreography until the next new release comes out next quarter. It’s always a HUGE party for us instructors, we love getting together to team teach, match our outfits, plan theme classes and launch the new stuff to our members who have been eagerly waiting and trying to get the details out of us for weeks on what they can expect! We literally look forward to Release Week like Christmas every quarter; it’s such an amazing week!! 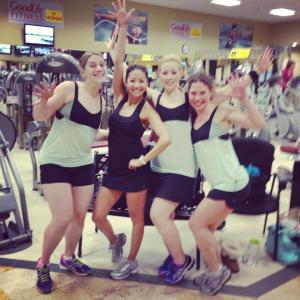 All that being said, Release Week is also a TON of really intense, hard work for us instructors as well and most of us are pushed to the absolute brink of exhaustion. Since most classes need to be team taught, a lot of us are teaching 2-3 times more classes then we normally would in a week. Combine that with the fact that the new releases usually tend to be a “step up” in intensity from the previous release and you’ve got a recipe for some seriously sore muscles and joints. Not to mention the hemorrhaging from the brain. It’s a freakin’ lot of choreography to cram in the old noggin’!

I went into Release Week this time apprehensive because my body was feeling like it was teetering on the edge of an injury in the weeks leading up to it. I was getting some pain in the top of my foot, and that pain migrated into the heel of my foot. Both totally minor things, but I know my body well enough by now to know that when those little things start popping up, something bigger is brewing.

In 6 days, I taught 10 classes. By the end of the week, interestingly enough, the pain in my foot was gone, but something new (and serious) had developed in my left knee.

My chiropractor (aka my angel) reassured me that it didn’t seem like I had done any structural damage to my knee (i.e. torn the meniscus or cracked any bones), but that it seemed that I had kind of hyper-extended it, and bruised/banged up the under-side of my knee cap. This kind of made sense to me because the pain was the most sharp and severe when I flexed my quad muscle with the leg straight.

In any case, I took 8 days off of any lower body activity, and started cautiously getting back into my high impact classes last week. I also went for a massage last night, and it made a world of difference. I’m feeling much better now!! Man, there is nothing like an injury to make you truly appreciate what your body does for you when it’s healthy!

While I was off teaching, I did get some extra swimming in, which was pretty much the only form of cardio I could do. That’s the kind of nice thing about triathlon training, if something’s wrong with one part of you; chances are there’s something else you can work on with the other parts!!!

I must say, my timing is really impeccable with this one. With my knee being bad for about a week and a half before I actually took any time off, the 8 days I did take off, and then the recovery time I gave myself as I eased back into my classes, I basically haven’t done any distance running in over a month, and the Chilly Half is just a week and a half away. Ugh.

I thought about passing on the race, but I’ve changed my mind and decided to do it. Part of my Half Ironman journey is becoming a person who finishes what they start. And that includes these races that I’ve committed to do along the way.

My plan is to get in a nice easy pace 5km run tonight; maybe a 3 or 4km run on Friday night and then a nice slow 12km run this Sunday morning. Next week I’m going to get in at least 2 slow 5km runs (Wednesday night and Friday night) and then just give it my best shot on Sunday for the race. I’m not expecting a good time, nor am I expecting to run the whole thing. I’m going in expectation-free, just hoping to enjoy myself and finish the race with a smile, just like John Stanton said.
I was so discouraged about this knee injury that I seriously considered closing down this blog and giving up on the entire triathlon. I realized over the past few weeks that it’s not realistic to expect this whole journey to be straight up all the way. Any athlete is bound to have their ups and downs along their way.

Some of you may have seen the news of American 4 time world champion alpine skier Lindsey Vonn’s terrible crash in Austria a week or so ago.

The crash (to quote Lindsey’s doctor) “shredded” the ligaments in her right knee, and she was air-lifted off the hill for immediate surgery. One week post-op she posted this photo of her right knee with the hashtag “longskirtsthissummer”. 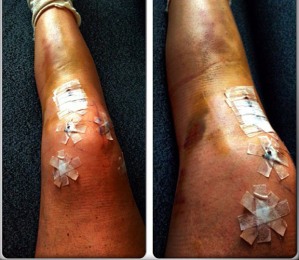 The totally incredible part (at least to me) is what she released in her statement to the public last week:

“I can assure you that I will work as hard as humanly possible to be ready to represent my country next year in Sochi (for the 2014 Winter Olympics).”

“She’s got her mindset, she’s going to come back stronger than she was,” Alpine director Pattrick Riml told the AP. “She’s got her goal — ‘I’ll be back in Lake Louise (for the 2013 World Cup Speed Races)’ — and Lindsey will do whatever it takes to be back.”

Can you imagine looking down and seeing your knee looking like it does in that picture, and somehow giving your head a shake, and vowing to be back tearing up a ski hill in 9 months?? The girl is fearless. Lindsey’s story gives me hope that no matter how bad things seem, with determination and an absolutely dogged refusal to give up, anything is possible.

All of my best wishes go out to Lindsey, I hope you do make it back girl, and (even though you’re American and will probably wipe the floor with our Canadian girls), I do hope that you come back stronger than ever. Anyone with your courage and determination deserves it.

Have you ever suffered a serious setback on your path to a goal? How did you deal with it? Any tips or words of wisdom to share with us?