Another two weeks has sailed by, and here we are almost at the end of January! Austin is growing and changing so much every week, it is truly magnificent to watch. January feels like it’s been a busy month, with lots of people to see and things to do. There are lots of family birthdays this month, so we’ve been eating lots of cake and celebrating lots of milestones! Little Austin has been along for the ride with all of it, and loving every minute 🙂

Honestly, not a lot to report  here, because everything is going so, so well! Austin is eating like a champ, and I can’t believe how solid he is getting! You really have to think twice when you go to pick him up now, you can’t just scoop him up without thinking about it anymore!

We haven’t had him weighed since December 15th (he was 12 lbs at that appointment), and I think that he’s probably somewhere between 14 and 15 lbs now (if I had to guess – I would say closer to 15, but you never know!). The next time that we weigh him will probably be at his specialist appointment for his vaccinations on February 20th, and by then I hope he will be over 15 lbs! Wahoo!

I’ve been pumping 4 times a day, and that gives us more than enough milk to keep afloat. My supply was getting a little bit low last week, but then I made some lactation cookies for my cousin (who just had her super sweet little babe last Tuesday by the way!) and got munching on them myself…..holy catfish did that ever boost my supply! It’s reassuring to know that if I ever do start to decline before we’re ready to stop, that I can make these cookies for a quick boost. We still breastfeed for his first early morning feed of the day (normally he wakes up for this feed sometime between 6am – 7:30am), and that is going perfectly as well. It’s pretty unbelievable to me how much we used to struggle with feeding Austin, and how effortless it is now. I’m so relieved that we’ve settled into a rhythm that works really well for us, and he seems to be thriving on it.

I don’t typically do a whole lot during the day aside from visiting at my parents house sometimes, so it hasn’t been a big deal to pump every 4 hours. I know that this could  be challenging as the weeks and months carry on though, and we start to do more and more things outside the house, or even as we go away on trips etc. I’m trying not to worry too much about it, and just go week by week.

We’ve made some significant progress in our sleep habits this past two weeks! Towards the end of week 13, I went to get Austin from his bassinet in the morning and was horrified to see that my little nibsy had wriggled himself down to the bottom end of the bassinet and was sleeping with his little knees up around his belly because there wasn’t room for his legs. Poor sweet baby, it just broke my heart. I knew that the time had come; my little babe had outgrown his bassinet.

I’ve been dreading moving Austin to his crib and his own bedroom for a while now because frankly the thought of him being a wall away from us terrifies me, but we took the bull by the horns and kind of just went for it one night, putting him down in his crib instead of in his bassinet (we didn’t even put him in there for a nap or anything first – just threw the poor guy right to the wolves LOL). Our little champion sleeper went down right away and slept the whole night through, no issues whatsoever! HOW did we get so lucky!?

While Austin has managed the transition to his big boy crib like a boss, it’s been his lunatic mommy that has been having a hard time. I’ve been waking up between 10 – 15 times a night in an absolute panic, stumbling out of bed like crazy and sprinting into his room to check on him, checking the baby monitor 30 times a night, laying awake and trying to hear him breathing on the monitor……it’s been wearing on me quite a bit to be honest. I always knew that I was a pretty anxious person, but I never foresaw how anxious I would be or become when it comes to Austin. It’s something that I really need to work on, for all of our health; it isn’t doing anyone any favours to have me so stressed out all the time.

God, what a roller coaster this all has been. I’ve been working my way back into exercise SLOWLY over the past few weeks. I started with some brisk walking on our treadmill, and even a little three minute jog, then layered on a 30 minute CX class down in our basement, and have even done a couple of low impact Step workouts with our BodyStep team.

When I first started all of this, I felt like I had set myself back a bit for sure afterwards, and was experiencing more pain and other symptoms for sure. My physiotherapist reassured me that I hadn’t done any damage to anything, that I was just exploring what my body was and wasn’t ready to do, and that I had probably just done a little too much too soon. As frustrated and upset as I was, I grudgingly agreed to dial it back and started doing simple squats every day; starting with 5. I did 5 squats a day for a couple of days, then increased to 10, then to 15, then to 2 sets of 15 etc etc….and I have to admit that it felt much better this way. Since then, I’m back to doing CXWORX now, and even team taught my very first class back at the gym yesterday at 15 weeks postpartum!

Although it is really great news that I’ve been feeling a little better, I do still have a lot of complications to deal with. I saw the OB that delivered Austin earlier this week, and she had some concerns about how things are looking / healing, and decided to refer me to a different specialist to take a look and do some more tests to determine if further surgery may be required. I’m hoping and praying that this isn’t the case, and that things keep moving in the right direction, but we will just have to wait and see. In the meantime, I’m taking returning to CX as a victory, and my sights are set on returning to BodyPump next. High impact classes like BodyStep and BodyAttack will take a little longer for sure.

Austin is using his hands like a champ now and his favourite toys are probably his multi-coloured rings which he loves to grab and shake around, and most importantly, shove in his mouth at every possible opportunity. 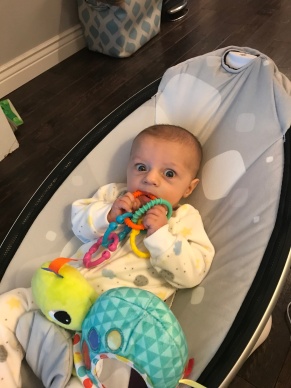 OMG this little baby is so funny, every single thing goes straight into his mouth, but his very favourite things to stuff in his mouth are his own hands LOL….if he had a third hand, he would be very pleased to try and stuff that one in there too…..

His head and neck strength is really great and we don’t even hold onto his upper back anymore when we pick him up! He also rolled over from his back to his front this week (week 15), but we haven’t been able to get him to do this again since earlier in the week. I know he is so close to rolling from his front to his back, he’s working so hard at it whenever we put him on his belly (we are guilty of probably not doing enough tummy time in a day to be honest)! He is also so babbly and talkative now, and absolutely loves when people pay attention to him and play games like peekaboo, or airplane (basically holding him horizontal under the chest and “flying him” around the house while making airplane noises LOL).

He is becoming more and more fun every day – and I just love seeing little bits and pieces of his little personality come to light. 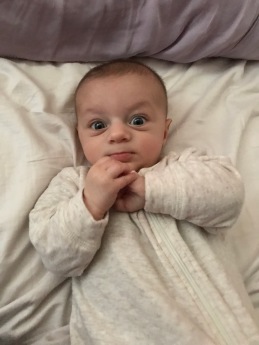 Eeeeeks, we are just about a month away from our trip to Mexico, and I’m starting to panic a bit and wonder what I was thinking when I booked this trip lol…..I’m super stressed about things like the water cleanliness and bug bites in Mexico, and just don’t know how we’re going to manage to sterilize our bottles and keep to our system that is working so well while we’re away for an entire week.

I’m thinking that this week I’m going to start a list of everything that we’ll need to bring with us, and I’d also like to take Austin back to our doctor for his four month check-up before we leave (four month check-up…..whaaaaat the heck is happening…..). We have our specialist appointment to test him for negative reactions to the regular vaccines on the 20th of February, and we are due to leave for Mexico on the 27th of February, so it looks like there is a good chance that we will not get the vaccines before we go away, unless by some miracle everything happens on the 20th, or very shortly afterwards, and we can sneak in for the shots a couple of days before the 27th. This all makes me super uneasy, and has been weighing on my mind a lot, but I guess at this point all we can do is our very best to keep him healthy, and to work through the process to make sure that it will be safe to give him the vaccines.

Thoughts on Motherhood and on Life

I’ve realized more and more as the weeks go on the stark reality that is motherhood, and life really. Without getting too deep and emotional: this is hard. All of it is hard. Whether you had a natural birth and tore to hell, or a c-section birth, or a smooth and easy birth, whether your baby sleeps 12 hours at night or 12 minutes at night, whether you breast feed, or bottle feed, or your baby rolls over or doesn’t roll over, or gets his vaccines or doesn’t get his vaccines. It’s hard; so is life.

That being said, motherhood has also been the most wonderful roller coaster that I’ve ever been on, and there are so many glowing moments that make the hard parts worth it, and that truly overshadow the struggles. I’m working harder these days to really drink in those wonderful moments and not take them for granted, not just when it comes to Austin, but in general. Moments together with our family, or quiet moments alone, happy times and celebrations, and mundane conversations and day to day life. Some of the health struggles that we’ve been facing lately have really brought all of this into sharp focus for me, and made me realize that life is too short to focus on the hard parts. Just some food for thought I guess, sorry to go all Oprah on you 😉

Well, I guess that’s it from us for now! Today is actually Matt’s birthday, so we are celebrating him today and the quiet giant that he is for our family. We would be up the creek without a paddle without him, that’s for sure!