So long awkward teenage years – and a big hello to the fabulous 20’s! I won’t keep you in suspense (although I’m sure that most of you already know by now)…. 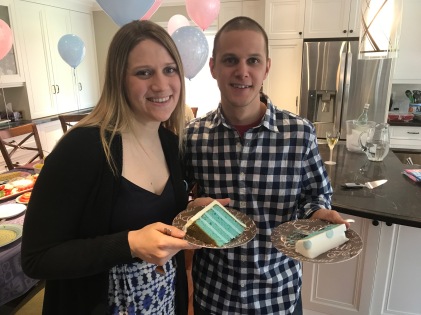 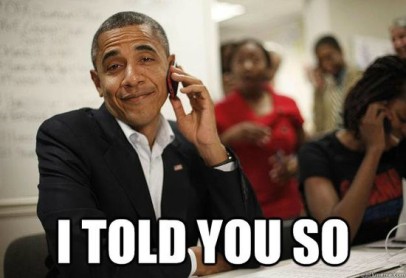 This week has been such a super fun one for all of us since finding out the gender last Tuesday! We were so excited for the weekend and for Matt’s brothers / girlfriends and dad to get into town so that we could finally break the news to them on Saturday!

I had gone back and forth over if I even wanted to have a gender reveal get together or not. I really didn’t want things to get too overblown, and I know people are so busy with their own schedules; plus with the shower coming up that’s yet ANOTHER day that we’re asking people to dedicate to celebrating us and babe (seriously, how selfish!). Matt had it just right (he normally does) when he suggested we just do a small get together with family, and it ended up being just perfect!

Matt’s youngest brother Troy and his girlfriend Amelia arrived at our place on Friday night, and we did a bit of running around to get some themed napkins, “Team Boy / Girl” paraphernalia and pink and blue punch supplies! There was lots of wagering on boy vs. girl, and it was so hard for Matt and I to keep pronouns out of the conversation when we were talking, especially because I’ve been referring to babe as “him / he” since Day 1!

The next morning was a bit of a gong show because (as per usual) I was trying to squeeze 26 hours into a 24 hour day, and went to teach my Saturday class before the party got started around lunchtime. There was almost a bit of a crisis where Matt wasn’t able to pickup our gender reveal cake from the bakery because we had our times crossed, but all’s well that ends well, and he ended up getting there just in time.

Although my stomach had been majorly off earlier in the week, and I wasn’t feeling great going into class, turns out that babe just needed some tuck jumps, because I felt great during and after class, and my stomach seemed to settle right down.

I tell ya, the best drug there is!

After class, I showered and got ready quickly at the gym and headed right over to my parents where everyone was waiting for me to bring the guest of honour to his party! By that time Neil and his girlfriend Kaitlyn had also arrived and the BBQ was in full swing! 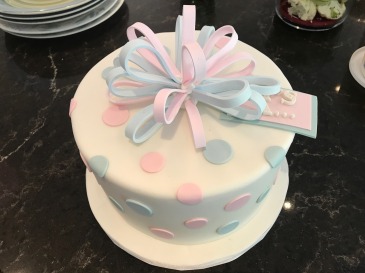 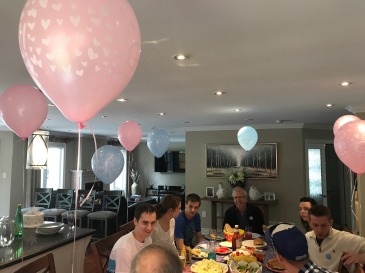 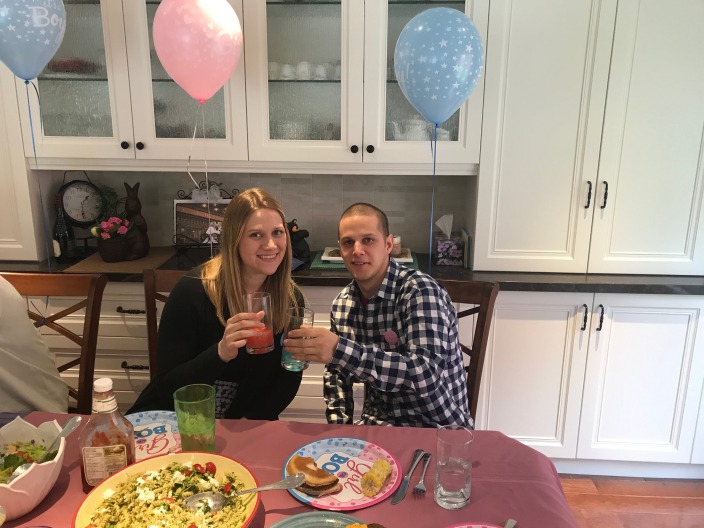 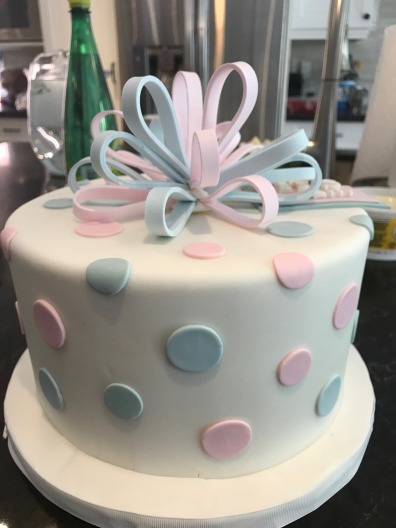 My mom had gone all out and got some boy / girl balloons to put up around the house, and I quickly noticed that the buttons that we had bought the night before were being well used and everyone was proudly sporting their team! I was actually quite surprised that there was almost an exactly even split between Team Boy and Team Girl – funny when so many people had told me they were on Team Girl leading up to the party!

We gobbled down our food pretty quickly because the troops were getting impatient to cut that cake and spill the beans once and for all! It was pretty funny to see them all get so antsy actually! JUST as we were finally about to get up and cut the cake, Matt managed to get a hold of his mom on her cell phone who told us that she was still 10 minutes away from home – so we had to wait! I thought we were going to have a mutiny on our hands! LOL

FINALLY, finally we managed to get Dianne and Scott on Skype and it was showtime! Unfortunately my WordPress platform doesn’t allow for videos, but if you’d like to see the video of us actually cutting the cake, the video is posted on my personal Facebook page: https://www.facebook.com/sara.fayed.

We all nearly died laughing when we watched the video back because my dad just sounds like he’s going to BURST with excitement, and is the first one to scream out “IT’S BLUE! IT’S A BOY!” well before Matt even pulled the slice out of the cake (guess he saw some blue residue on the knife?!). I think he will hear about that one for the rest of time! 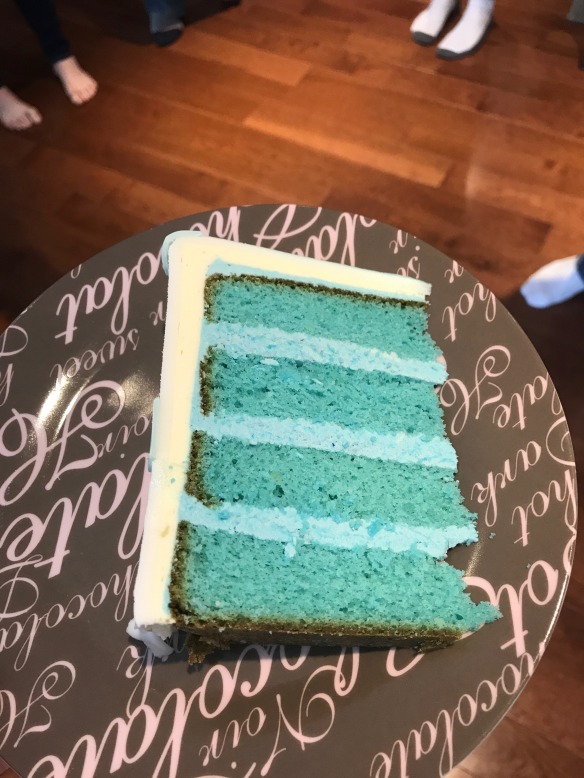 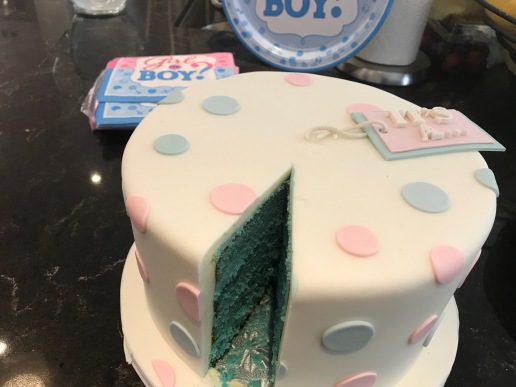 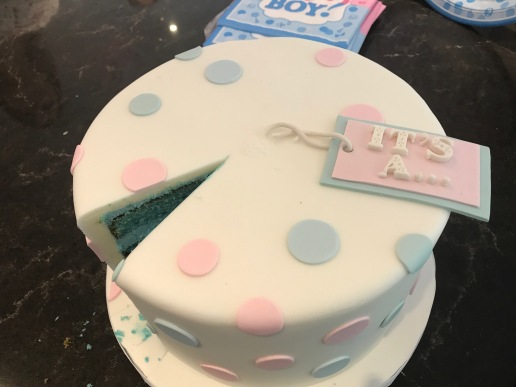 The rest of the afternoon / evening was a lot of fun; in addition to Matt’s dad, Neil and his girlfriend ended up staying overnight at our place, and we went to do an escape room nearby our house which was a lot of fun! Turns out the four of us (well – actually, let’s be honest, the three of them, I’m not great at this whole escape room thing, although I do make a great cheerleader ;)) are pretty good at these things, because we have an undefeated record so far (2/2)!

The next day was Mothers Day, and Matt ordered me some lovely flowers from him and Babe (which through absolutely no fault of his own ended up being delivered the next day – poor Matt felt so bad about that 😦 ) and we spent most of the day down by the water at Spencer Smith Park, and then out for dinner with the crew in Oakville. It was a really nice weekend with family, and I was sad to see it end!

As we approach (and now technically are PAST) the halfway point, I think all of this is feeling so much more real for Matt and I! I also think that we are both starting to mildly panic about how unprepared we are at the house….there is SO.MUCH.TO.DO. 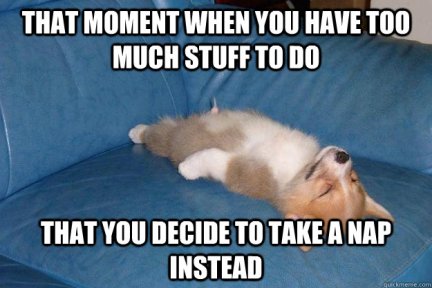 Big priority #1 is finalizing our research and test-driving a few strollers / car seats / cribs and baby room furniture and choosing the ones that we want for babe. Then….we tackle the storage room conundrum / disaster to make room for everything that’s currently in our office to move downstairs.

In general, I think I’m doing a little bit better at dealing with the anxiety of all of this stuff (the intrinsic stuff – the organizing / preparing externally doesn’t stress me out so much). I think as each week goes by I get a bit more confident that maybe I won’t totally screw this up, which is a nice thought (in an odd kind of way)…… here’s hoping, anyways!!

Well – hope that you all have exciting plans lined up for the Victoria Day long weekend, Matt, Babe and I are headed out to Kingston for my cousin’s graduation from the RMC on Friday / Saturday, but will be back in town Sunday / Monday.