I’ve started to write a post for Going the Distance about four times, and trailed off each time because I didn’t like the tone or the direction that I was headed in. I hope I’ve finally got it right this time.

The past month has been a bit surreal. My brother completed the lead-up therapy to get his stem cell transplant, got the cells transplanted on Friday October 18th and it’s been a total whirlwind ever since then. He’s managed to pick up a couple of infections which have made him really really sick, and have really scared the crap out of us. The good amazing news is that he seems to be doing okay for now, my cells have grafted and they seem to have most of his infections at least under control (although one really pesky one is still hanging around).

There have been some moments (although I’m really proud to say not too many of them) where I feel like all of this is just too much to handle. Ever since he’s been in the hospital, I’ve had this dream in my head of him walking around in normal clothes, walking out the front door of my parent’s house and closing the door noisily behind him like he always did, drinking beer at the casino….and then when I snap back to reality and see the actual state that he’s in right now, it just feels like we’ll never ever get there. It seems like a lifetime away.

Re-reading my Muskoka Race Recap post the other day (yes, I do that often, don’t judge!), I realized how simple the solution to the overwhelmed feeling was. Ever since then, I’ve felt a lot better about things. Re-reading what was going through my head while the race was going on reminded me how I absolutely, steadfastly refused to let myself picture the finish line of the race until I was within 1km away from it.

I remember countless times (hundreds, at least) during the race my mind would wander to the finish line and picture the celebration that would take place there, imagine what the first thing I would say to Matt was, think about the medal and the Finisher jacket and the food we were going to eat and all of that wonderful stuff. Each and every time that my mind went there, I consciously (and sternly) pushed it away, and kept my focus like a laser beam on the smaller goal that I had in front of me (usually to get to the next aid station).

I think sometimes by focusing too much on the ultimate BHAG, we can really make ourselves crazy. When I set the goal to complete the Half IronMan back in October 2012, thinking about myself completing a Half IronMan was about as fictional as the idea of going for a unicorn ride. It was ridiculous, impossible, and a world of time away.

Starting with little things like the Eggnog Jog, the Chilly Half Marathon and Around the Bay started to make at least the run part of the day seem like it was somewhat achievable. Swimming lengths in the pool (and touching old people inappropriately – remember that?) started to make the swim seem manageable. Biking with Neil on the May long weekend in Muskoka gave me some confidence on the bike.

Muskoka was always the ultimate goal, but along the way there were so many stepping stones to it for me to focus my efforts on.

Cancer seems to be no different.

The ultimate goal (or the “Muskoka”) in this case is for him to walk out of the hospital in regular clothes, come home and start to live a normal life again. But at this point in time, that goal is about as far off as Muskoka was for me back in October 2012. We still have so many smaller goals and stepping stones to achieve before we can even let ourselves picture that end-state.

The whole perspective shift has gotten me thinking about goals that we set in other areas of our lives. How many things are we setting ourselves up for failure on simply by getting overwhelmed with the magnitude of the end-state?

I’ve been beating myself up for the past year or more about my total inability to cook and get myself eating “real” food. When I picture in my head what my ideal end-state is, it involves me doing a bunch of meal-prep on Sundays, portioning out food so that it’s sitting neatly in the fridge in labeled, organized containers waiting for us at the end of each day, grocery shopping once a week and getting all the ingredients I need, taking cooking classes, making a recipe binder, buying better Tupperware and labels for it……..it’s totally overwhelming, and I usually get exhausted and stressed out just thinking about it and resort back to my old ways.

Maybe my first focus should just be on planning meals for the week. Forget the cooking classes and the meal-prep and the Tupperware and everything else.

I invite you to take a look at the way that you’ve been compartmentalizing those big goals that you have in your own life. Do you get bogged down and intimidated by the big picture? If you’re like me and the answer is yes, then give the staged approach a try and let me know how you make out. It’s made a world of difference for me. 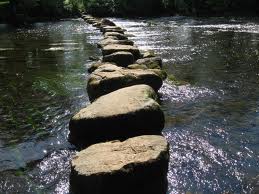 On the topic of BHAGs and staged approaches, I’ve just about nailed down my big goal for 2014, and it’s a big one! I’ll be unveiling not only the goal itself, but the stepping stones along with it in my next post, so stay tuned!!

Have a fabulous weekend – work hard, play hard and don’t forget to stop and smell the roses 🙂

One thought on “Stepping Stones”