Hope your week is off to a great start! For me it’s “Release Week” at the gym this week, so I’m up to my eyeballs in choreography and classes. I’ve got three (yes, three) classes tomorrow, one of each of my programs, and I’m just hoping that my body holds up!

So off the topic of 150 year old joints, do I ever have lots to dive into today! It was the Toronto Triathlon Festival this past weekend and both Neil and I did the Olympic distance race on Sunday morning. There’s sooooooo much to tell you, I don’t even know where to start!

I taught my BodyAttack class on Saturday morning and then Neil, Jess and I headed downtown to pick up our race packages and attend a mandatory athlete briefing before the race. Matt had plans of his own (i.e. running 35 kilometres) so he got left behind. Sorry Matt 😦

Traffic was actually great getting downtown, until we actually tried to get off the highway and into the downtown core. What a freaking train wreck. I don’t know who the urban planners are in Toronto, but someone is screwing up HUGE down there. They’ve got buildings sprouting up literally hanging over top of highways, closing 4 of 5 lanes of traffic for construction (that isn’t even taking place by the way), pedestrians running rampant like an over-populated ant hill….it’s just a disaster. A total and complete, freaking disaster.

We had plenty of time to make our briefing at 3pm, but it took us about 40 minutes to get off the highway and into the downtown core, and it was at that point that we discovered that every parking lot in a 40km radius was full. With the clock ticking cheerfully by, and the prospect of having to wait an extra hour to get the next briefing at 4pm, we ended up ditching my car in a totally illegal parking spot, SPRINTING down the sidewalk to the Westin Harbour Castle, and then running a full lap of the building because we were on the wrong side to get inside.

By the time we burst through the doors of the conference centre, we were soaked in sweat, breathing hard, and it was 3:10pm. We had missed the damn briefing.

Thankfully we ran right into a very kind man who handed us some bottles of sample water from the race sponsors (thanks Porter!), told us to relax and that they would do their best to get us in for another briefing at 3:30pm. In the meantime, we got our race numbers, went and got body-marked and took a quick tour of the expo. We noticed that there was a tent where Simon Whitfield had been earlier, but he wasn’t there when we walked by.

We headed in for our briefing at 3:30pm and that was when I started getting EXTREMELY nervous. The swim cut-off time was 70 minutes for the 1.5km swim, and for some reason I was seriously freaking out that I wasn’t going to make it. My swim time in Milton was 23 minutes for 750 metres, so assuming everything went according to plan, I really shouldn’t have had a problem, but you just never know when it comes to this stuff. You just never know.

My heart was racing by the time we walked out of the briefing. We got our race packages, and made our way back through the expo out to find Jess. As we were making our way out of the expo however, fate dealt us a kind card, and we noticed that Simon Whitfield was back in his tent area and taking pictures with people that passed by!

I’ve met Simon once before at the Can Fit Pro conference last year. He was the keynote speaker and told some hilarious stories about standing in the starting corrals for the swim and trying to joke around with the reigning world champion standing next to him (he didn’t take kindly to it ;)). I really enjoyed his speech, and really admire Simon for his ability to stay humble even with all of his massive accomplishments. He really does seem like a regular, happy go lucky kind of guy.

Neil and I both got pictures with him, and chatted with him for a few minutes before heading back out to meet Jess and get the heck out of Toronto. We certainly didn’t shed any tears on our way out, let me tell you. The kind of ironic twist of fate was that if it weren’t for the horrific traffic, we would have been in and out of the expo without ever meeting Simon! Guess what they say is true, everything happens for a reason 😉 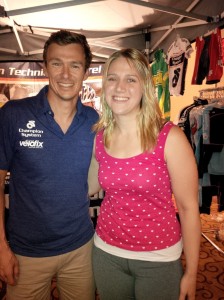 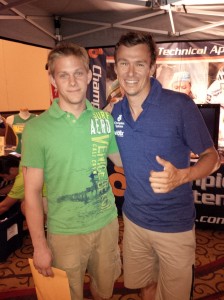 We gobbled as much pasta and carbs as we could possibly handle on Saturday night, and went to bed early for the 4:30am start time.

I was soooo super nervous in the morning when we got up. One big win from this race was that I’ve determined what my “perfect breakfast” is before a big race. Betcha won’t guess what it is???? 😉

I’ve struggled all year with what to eat when races are early in the morning, and I don’t want to eat anything that may upset my stomach. For half marathons, I’ve only been eating a protein bar before I start out, but I found in Milton that a protein bar just wasn’t enough to get me through the whole race, and I was so hungry that I was feeling light headed by the end of the race. (Remember that cold cut sub I told you about that I devoured after the Milton Tri?? That’s probably why it tasted so epic…..;)).

I got the idea for pancakes because Matt made up a big batch of pancakes on Saturday morning, and I had some before I went to teach BodyAttack. I had a ROCKIN’ class and felt amazing teaching, and so thought I would give them a whirl before the big race.

So Matt got up at 4:30am and started cooking pancakes for me.

And the award for boyfriend of the year goes to……

Anyways, we FINALLY hit the road, made it into Toronto no problem, parked about 200 metres away from the transition and made our way in to start setting up the bikes. Guess those pesky tourists don’t feel the need to explore the city at 5:15am??? 😉

We milled around for a while, before finally getting into our wet suits and making our way down to the swim corrals. I was so beyond freaking out; you could probably see my heart beating through the wet suit. I made some friends in the corrals and started chatting with two girls beside me who were also very nervous about the race. We chatted until it was our turn to make our way out onto the dock and jump into the water. 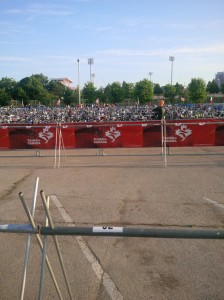 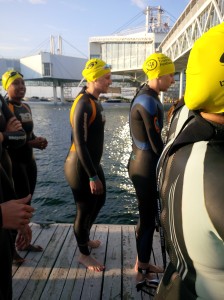 I hesitated for a split second and then took the plunge and jumped in feet first. Here goes nothing………………………………..