Sorry for the long delay in getting this triathlon race recap out!! I’ve had one of the most amazing weeks that I’ve had in a long, long time. Last year I was lucky enough to be approved for a 3 day off-site training program called The 7 Habits of Highly Effective People™ based on the international best-selling book by Dr. Stephen Covey.

Even if you think you’ve never heard of it, I’m willing to bet that at some point in your life one of your parents, grandparents or some other wise adult in your life gave you a copy of it when you were somewhere between the ages of 15 and 21, and that it then proceeded to collect dust on a bookshelf in your parents library where it likely still resides.

Does this ring any bells?

Anyways, the training was this week from Tuesday – Thursday, so I’ve been off my routine a little bit. I am walking away from the course feeling like an entirely different person. I can’t remember ever feeling such a sense of clarity and peace in my entire life. This course was such a huge deal for me that I’m actually planning to launch a “not so mini” series going through each of the seven habits and what they are all about.

But for now – we’ve got a race to recap, and I won’t leave you in suspense for a moment longer 😉

So last Sunday was the first triathlon of the year for the 2013 Subaru Race Series out in Milton, and also my first crack at this thing they call a triathlon. The Sprint race was a 750 metre swim, a 30km bike and a 7.5km run. Neil decided that he was in to do the race as well, and so he and Jess came out Saturday morning to stay with us and spend the day scouting the course!

The first thing I’ll address is the whole wetsuit conundrum. I left you in my last post on a bit of a cliff hanger and wondering if I would survive my test swim or if I was doomed to a life cohabitating with Sponge Bob at the bottom of Lake Kelso. (Sorry about that by the way).

Matt and I went out to Kelso on Friday night to test my Costco wet suit in the water and see how I felt. Just to put things in perspective, on the drive up to Kelso, the wind was so strong and the weather so vile that we passed by an arm of a tree that had crashed down onto the electrical lines and was on fire as we drove past. And then came the rain. Oh the rain. By the time we got to Kelso, it was torrential downpour, thunder and lightning. We pulled up to the front gate of Kelso, rolled down our window and asked the attendant the only natural question:

“Can we still go for a swim in the lake?”

The “attendant” was really an 18 year old kid, who laughed, shrugged and said “Sure, why not?!” I could think of more than a couple good reasons why not at that point, but with the thunder and lightning calmed down quite a bit by that point, we decided to go for it.

I was freaked out a bit when I first got in the water by the strong current, and the frigid temperature that really seemed to take my breath away when I put my face under. A few minutes paddling around loosened me up and reassured me that although the Costco wet suit definitely wasn’t ideal, it would be fine for this triathlon and would see me through until I could work myself up to a “real” one.

We did a quick scout of the bike course on Saturday and got a look at the total @*|&%# of a hill that we had to climb. The course description told us that it was 1.4km of straight ascent, but I swear it was longer than that. Suffice to say that my car had a hard time getting up the hill; forget my poor, poor brutalized legs.

Deciding that the hill was future Sara and Neil’s problem, we had a yummy pasta dinner and hit the hay fairly early to get ready for race morning. I went to sleep feeling very similar to the way I did before my very first half marathon in September 2010 in Ottawa. It’s been a long time since I’ve felt that nervous before any event, my stomach was a mess, and I couldn’t really sleep, was tossing and turning….I really, truly had no idea what was going to happen the next day.

We got to Kelso well before the 8:30am cut off for entrance to the park and right away I was totally overwhelmed and confused! There’s a lot of logistics when it comes to triathlons! First of all, nobody ever explained to me exactly how you “rack” a bike. I nonchalantly kind of looked around at what everyone else had done, and kind of slid Jilly up onto the rack somehow and by some grace of God she actually stayed put, but I counted myself lucky on that one! We got permanently tattooed – I mean , body marked with our numbers and our ages and by the time all of that stuff was taken care of, the Try a Tri race was beginning and we watched the swim set off.

Before long, it was our turn, and Neil and I said our (final) goodbyes to everyone and headed over to the water. We were wearing baby blue bathing caps to represent the first wave of swimmers because they had staggered the start by age. I’m not sure I agree with this approach, but we’ll get to that in just a second.

The horn went and we were off. I hung back quite a bit from the rest of the blue caps so that I wouldn’t get caught up in the fray (I know, I know, I said in my last post that I didn’t give a crap about all of the swimmers around me, but it turns out that I’m an idiot, and I actually do okay?!) and when I started swimming, I was back with the last 4 or 5 blue caps, and feeling quite comfortable. The sun had come out on previously pretty gray, dreary morning, and I was feeling really good. We passed the first buoy (or “Dorito” as Matt and Neil call them because they are big orange trapezoids that look just like Doritos chips floating in the water hehehe) and then rounded the first corner, and everything was feeling really good. I started to feel a bit more at ease. Maybe this wasn’t so bad after all.

And then, they caught me.

Like a pack of neoprene clad dolphins, the red caps descended on me like vultures, and I got totally beat up in this fray of splashing, kicking, arms and bug-eyed goggles that seriously nearly caused me to panic for about a half second before I pulled myself together and reminded myself that I was fine. I managed to pull myself together and keep swimming, but I no longer had the luxury of swimming on my own, now I was caught up in the pack of red caps (the 30-39 age category) and had to really keep my wits about me.

My head started to play tricks on me as we rounded the second corner at the top of the pentagon of Doritos. I pretty much had the reel “You’re a loser, you’re a loser, you’re a loser” playing on repeat in my head like a ticker tape parade. I was starting to see green caps (the 40-49 age category) and even one pink cap (the LAST age category!). I thought to myself how slow and out of place I must look, and kind of just kicked myself for not paying more attention to the swim. While all of this was going on and my mind was occupied with all of these wonderful thoughts, I forgot one very important thing.

To lift my head up and look where I was going. 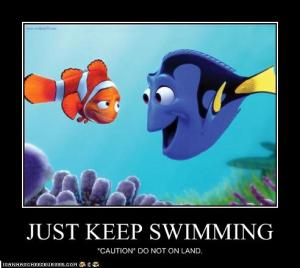 As my head slowly started working again, I started to wonder about a couple of things. Like, where were the paddle boards that had been following the last place swimmer in the Try a Tri race? I did lift my head right out of the water, looked ahead and saw that I was still headed straight for the beach. No problem, head back in the water and keep on swimming. At that point, I realized that I was no longer alone, and a man in a green cap was beside me. I was pleased that I wasn’t alone at the back of the pack, but something was still sitting uneasy with me. Where were those paddle boards???

I lifted my head again and once again saw the beach straight ahead, but I wasn’t satisfied with it the second time. I stopped swimming altogether, and started to tread water to get a better picture of what in tarnation was going on. The beach was indeed straight ahead of me. But it was when I turned my head to the left that I got the shock of my life.

The swim course was a pentagon shape. I’ve outlined the swim we were SUPPOSED to do in green on the map below. The swim that I ACTUALLY did is in pink.

What a dummy. I swam RIGHT into the centre of the pentagon, and worst of all, I took poor Mr. Green Cap with me!!!! When I turned my head to the left, I was absolutely shocked to see that not only was I not the last place swimmer, but all of my blue capped friends were still there as well! I was right in the middle of the pack! I called out to Mr. Green Cap, but he didn’t hear me, and so I sheepishly started back off in the direction of the far corner Dorito to course correct.

I finished the swim shaking my head at my obvious lack of direction, but came out of the water to Matt, my mom and Jess cheering me on. I later learned that they had watched the lone swimmer trail off into the middle of the pentagon, and said to each other “I hope that’s not Sara….” 🙂

I was pretty beat after the swim, but knew that there was a long way to go. 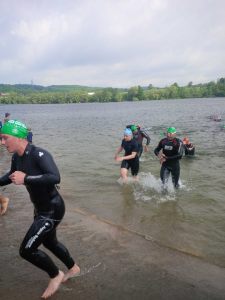 I’ll pick up here with the bike and run legs of the race a little later this weekend!!